The Ecuadorian Serie A or Primera Categoría Serie A is Ecuador’s national championship contested between 12 teams.

The current champions are Sociedad Deportivo Quito or simply Deportivo who had previously won the championship 4 times before 2011. They currently share the Olympic stadium Atahaulpa with El Nacional, Universidad Católica (Seria B) and the Ecuadorian national team.

Also in the nation’s capital city (or slightly outside) are Independiente José Terán, a small provincial team that proudly sit atop of the league this season.

Quito’s biggest club however is LDU Quito (Liga Deportiva Universitaria de Quito) or La Liga who reside in the  Estadio de Liga Deportiva Universitaria or Casa Blanca (White House). Since the 55,000 capacity stadiums inauguration in 1997, La Liga has enjoyed their greatest period of success with 6 national titles and 4 continental titles (the Copa Libertadores, the Copa Sudamericana and the Recopa Sudamericana twice).

Historically, La Liga enjoyed a fierce rivalry with Sociedad Deportiva Aucas (Aucas) also of Quito but in recent years Aucas have failed to reach Serie A and currently reside in the third tier of Ecuadorian football. As a result there has been no possibility for the Superclásico de Quito.

Ecuador’s biggest and most populous city is Guayaquil; however it has only two main football teams in the Seria A.

Barcelona Sporting Club is probably the country’s most popular team and play at the Monumental Banco Pichincha which with a capacity of 60,000 it is the country’s biggest stadium. They also share the most title wins (13) with El Nacional and to date is the only club not to be ever relegated from Ecuador’s premier division.

Barcelona’s great rivals are Emelec also of Guayaquil and their clashes, Clásico del Astillero (the Shipyard derby) is known as the most important and historic game in Ecuador. They play at the Estadio George Capwell (named after a wealthy, American benefactor) and as last runners up qualified for this year’s Copa Libertadores.

The rest of Seria A’s teams are spotted around the country from Manta on the east coast, newly promoted LDU Loja and Deportivo Cuenca from the south, and the centrally situated Macará, Olmedo and Técnico Universitario. 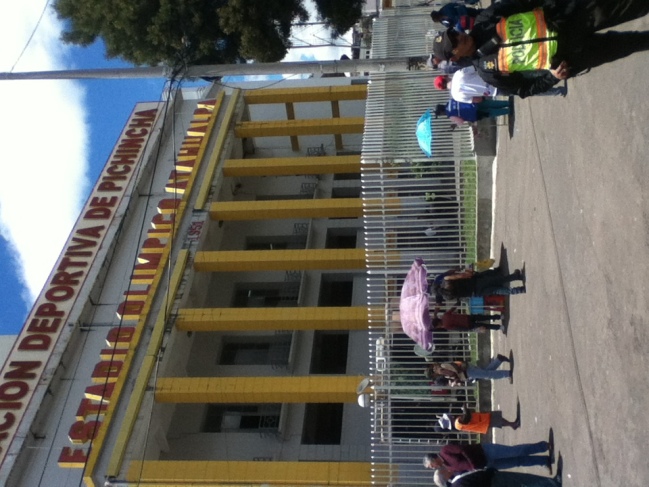 The league format seems to be fairly fluid and changes from year to year but instead of the normal Latin american system of Apertura/Clausura they follow two stages of round robin. The winners of each stage then play for the title (if the same club wins both stages then it is automatic champion) and the the other best placed teams compete for runner up spots and continental competition places.

Thankfully relegation and promotion is two up two down.