In a surprising move Fidel Martinez has opted to move to join Mexican Primera Division side, Tijuana or Club Tijuana Xoloitzcuintles de Caliente to give them their full name.

Martinez or the “Ecuadorian Neymar” has impressed in this year’s Copa Libertadores with his marauding runs down Deportivo Quito’s left hand side. An impressive performance against Chivas Guadalajara of Mexico, where he also chipped in with a goal, may have alerted Tijuana to his abilities. 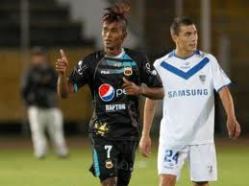 The left footer has made solid progress since an unsuccessful spell for Cruzeiro (Brazil) early in his career and since then has scored 12 goals with many more assists, in 50 games for Deportivo Quito.

However, this form has not been rewarded with an inclusion in next week’s World Cup Qualifying squad.

Personally, I thought Martinez was capable of playing in stronger league than Mexico, which although stronger than Ecuador’s Serie A is still far from the top 8 leagues in Europe. In addition, Tijuana is a new team having only been founded 5 years ago and recently promoted last year. 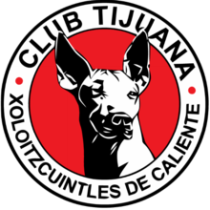 TIJUANA’S BADGE MUST BE THE BEST IN THE BUSINESS

Los Perros Aztecos (The Aztec Dogs) seem to have great ambition and they are recruiting many players to play in their impressive new, Estadio Caliente.

An impressive 6th position overall in last season’s Clausura bodes well for the northern Mexican team but it will be extremely difficult to compete with the likes of Cruz Azul, Monterrey, Chivas and America in the long term (although Santos and Tigres are currently bucking the trend as Champions).

Martinez should be rewarded with national team inclusion in the future especially with so many Ecuadorians plying their trade in Mexico but I can’t help feeling this is a move sideways rather than forward.

He definitely has the ability to play in France, Holland or Italy which could have acted as a stepping stone to La Liga, the Bundesliga or the Premier League. However aged only 22 he still has a huge amount of time to compete in Europe.

The  Xoloitzcuintli are a rare breed of Mexican hairless dog which were rescued from extinction in the 1950’s. Wild versions are sometimes misidentified as the Chupacabra.