It’s a common held belief in Buenos Aires that Lionel Messi is more Catalan than Argentine and he doesn’t play with the belief and passion for the Albiceleste as he does  Barcelona. Last night’s game should do much to dispel that particular myth.

Ecuador were put to the sword by an imperious man of the match performance by Messi. The best player in the World finally replicated his club form and produced an inspirational display, captaining his country to a 4-0 demolition of a disappointing Ecuador.

He had a hand in all 4 goals and delighted the Monumental crowd with his trademark, mazy runs and neat inter-linking passes. In the end 4 could have easily been 6 or 7. 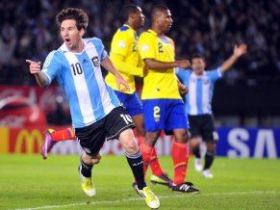 Unsurprisingly, Argentina started the brighter and were invited by Ecuador to break down their deep lying defence. Patience in their build up was rewarded just before 20 minutes when Di Maria linked well with Messi then weighted a sweet, left-footed chip to Sergio Aguero. The replay showed the Man City hit man to be in an offside position but Jairo Campos was hesitant and let Aguero slide the ball past the goalkeeper and take the lead.From then on Messi really started to turn the screw. The Argentinean playmaker has to the ability to weave and glide past the opposition making them look desultory and sluggish, when he received the ball in midfield on 29 minutes he did just that despite the attention of 3 markers.  The Argentinean squeezed through two midfielders then threaded a ball through to Gonzalo Higuain who again slid the ball past an outstretched Dominguez. 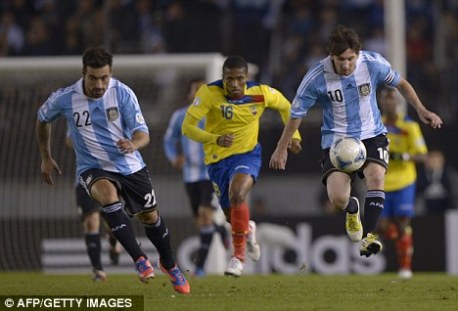 The 3rd was not long in coming after. Ecuador were robbed of position on the edge Argentina’s box and Messi turned defence into attack quickly with a 30 yard run through the centre. His lay-off to Higuain was returned to him in the box and he then dispatched the ball high into the Ecuadorian goal.

Ecuador tried to respond with substitutions (Ayovi for Saritama and Montero for Suarez) before half-time but the damage had been done and the game was over as a contest.

In the 2nd half Argentina were content to let the Ecuadorians attack and catch them on the counter. To be fair Ecuador looked more threatening in the 2nd half but over and over again they were hustled off the ball or deprived of possession to easily. Desperate to get a toe hold in the match their players were trying to do too much individually instead of passing. When scoring opportunities were created Benitez and Suarez were disappointing and Sergio Romero was left largely untroubled.

On 75 minutes Di Maria rounded up the scoring with a low drive from the edge of the box. Messi hadagain rounded a few players but his final shot was blocked by Jairo Campos. Jose Sosa rescued the ball from going out then passed cross goal to an oncoming Di Maria who grabbed Argentina’s deserved fourth goal.

The win drops Ecuador to 5th place behind Venezuela,who claimed an impressive 1-1 away draw to Uruguay while in turn Argentina move to the top of the table with 10 points ahead of Chile, who won 2-0 in Bolivia, and Uruguay. 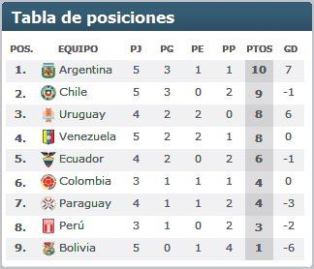