It was my intention to get up to Sangloqui, home of Independiente Jose Teran on Sunday. However because the bus journey back to Quito takes over an hour I would have missed the European Championship final  at 1.45.

As a result it was to be visit to the Atahaulpa Stadium to watch El Nacional vs Liga de Loja. 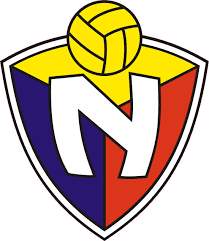 Along with Barcelona, El Nacional are the most successful team in Ecuadorian football with 13 Serie A titles and have represented Ecuador in the Copa Libertadores a record 22 times. They are administered by the Military and alike Chivas Guadalajara of Mexico and Atletic Bilboa of Spain they only play nationally born footballers giving the nickname of Puros Criollos or the Pure Natives.

This term El Nacional have been fairly dreadful and before yesterday’s game they were languishing in 7th position (last year they finished 3rd behind Emelec and Deportivo Quito) , far off the pace but ahead of city rivals Deportivo Quito. They were coming off a 2-1 home defeat to current leaders Independiente last week and needed to salvage at least a point against Loja.

Liga Deportiva Universitaria de Loja or simply Liga de Loja come from the southern based city of Loja and have the nickname of La Garra del Oso or The Bear Claw in English.

Despite only being promoted in 2010 Loja have surpassed all expectations this term and sat in 2nd position before yesterday’s game.This is a major achievement considering their relative wealth and a capacity stadium of only 15,000. Last week they secured a credible home 0-0 draw to Barcelona and were looking to pressurise fellow “minnows” and leaders Independiente.

Although I got to the stadium 5 minutes late I could have waited till half time and still not missed anything. Barely a shot was mustered nor chance created leaving both goalkeepers largely untroubled. A paltry crowd of 3,000 did their best to rouse the teams but in general it was another sedate affair. The Loja fans filled the far right hand corner and were more voluble and greeted their team with the obligatory shower of toilet rolls after the break. 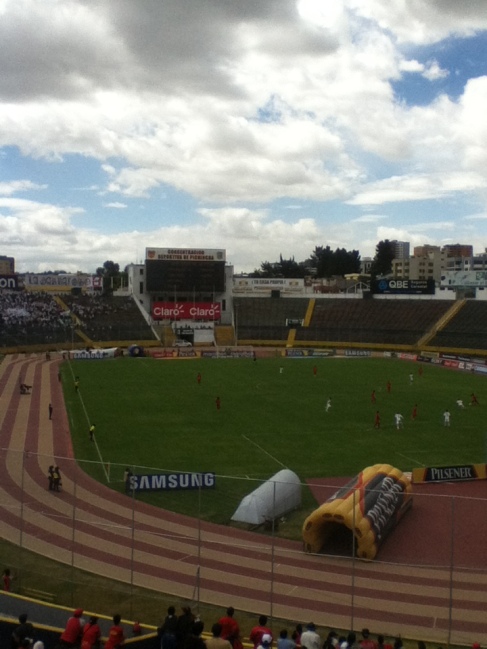 Both teams started the 2nd half with a greater intensity and Loja were denied the opener when Renato burst down the middle straight from the kick off but was scythed down mid shot. Nacional immediately responded with neat build up play down the left hand side through Caicedo and Pita but the final cross sailed over the crossbar.

The Loja goal-keeper, Fernando Fernandez managed to hurt his foot while scrambling for a cross which delayed the proceedings for 4-5 minutes. It was hard to see how he hurt his foot but if I learned one thing form Ecuadorian football it is the players never need a 2nd opportunity to go down and receive medical treatment.When Fernandez finally recovered he spread a beautiful ball down the left wing to an on-running Jonny Uchuari who skipped past a defender and crossed for Renato, who volley home from 5 yards in 53 minutes..

The goal sparked the match into life. Almost immediately Nacional raced up field and attacked the Loja goal. A defected cross found Marcos Caicedo at the edge of the box and he smashed the ball past the helpless Fernandez to bring back parity.

From then on Loja really started to take control of the match.Time and time again the Nacional defenders were slow to react and lax in their marking. Despite towering above the little Brazilian, Renato the Nacional defence were unable to cope with his incisive runs and bursts of speed. The Nacional right back, was suffering a torrid time from tormentor in chief Uchuari who was skipping past challenges and laying on chances for attacking partner.

In 60 minutes Renato doubled his tally when he met a simple through ball high and down the middle. He had time to control the ball but instead chose to a dive and head past the marooned Danny Cabezas.

Nacional tried to rally but seemed bereft of ideas and lacking in attacking options.Their main attacker, Anangonó was full of running but in all the wrong directions and his first touch was at times horrific. The Loja defence easily marshaled any Nacional threat and resolutely blocked any long range efforts.

Renato wrapped up the game and an impressive hat-trick on 73 minutes again from a pass down the middle. He collected the ball with one touch then dispatched it past Cabezas with the next, giving no time for the keeper to react. It was the best goal of the three and deservedly secured Loja’s victory.

The win continues Loja’s  unlikely championship challenge at moves them up to 2nd position behind Barcelona while Nacional’s loss sees them tumble 9th or 4rth bottom.