The Estadio Olimipico Atahaulpa has seen better days and more than deserving of a lick of paint and a general spruce up. If its character you want then Ecuador’s national stadium has it in spades but if its comfort and safety then your better to head to the Casa Blanca, home of Liga de Quito. 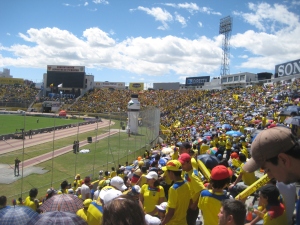 I have only been in the Atahaulpa once when it has been full, and i mean full to bursting point. Usually it’s league inhabitants: Deportivo Quito, El Nacional and Universidad Catolica barely attract a 3rd of the stadium.

In July’s World Cup qualifier versus Colombia there was not a free seat in the house. Thousands more than the official capacity of 40,948 were rammed into the crumbling old amphitheater and with hundreds of people sitting on the stairwells and down the aisles it was dangerous in the extreme. Also with a deep pit below and between the fans and pitch it was not hard to imagine the possibility of disaster.

That being said the atmosphere was amazing even when purchasing a beer or visiting the toilet entailed a slalom course of hell. It was probably as close as you can get to 1980’s British match experience. The likes of which we will never see or feel again.

The stadium was opened in 1951 and it’s hard to believe it has changed much in the years since. It is a big  concrete block of a structure which looks like the home of a Soviet Bloc team or nation. Unless you pay extra for the covered Palcos area you will be left open to the weather, its beating sun or sometimes torrential rain and similarly the Palcos/Tribuna are is the only place with seats.

When you are paying only $6-7 dollars for a normal match-day ticket a seat could be viewed as a luxury but at $25 for the international matches it is the least you could expect. With this in mind the Ecuadorian Football Federation has decided to seat the whole of the stadium at the cost of $17 million.

The refurbishment will decrease the overall capacity but as the security at capacity games seems to be lax in the extreme it will likely not make a difference.

However as the Ecuadorian Football federation invest in their national stadium they also face the possibility of losing two of their main tenants. Both El Nacional and Deportivo Quito have released plans for their new stadiums and while these have been protracted ambitions it seems they have real pretensions to fly from the national nest.

While Deportivo Quito’s  plans have been on going for a a few years El Nacional have taken the next step and rewarded the construction contract to a Mexican company. Both teams however will be hoping a change of venue will inspire their teams into an unprecedented era of success alike their city neighbours Liga de Quito who went on to win the Copa Libertadores and Copa Sudamericana post flit.