It was hard to believe that Sunday’s game in La Casa Blanca (the White House) was a derby or the “Clásico Capitalino”. Although the stadium was over half full there wasn’t the fervent atmosphere you would usually associate with a derby.

Maybe it was the 11.30am kick off that created the subdued atmosphere but as I ambled into the stadium I was fairly underwhelmed and a little disappointed.

La Casa Blanca or Estadio de Liga Deportiva Universitaria has been the home to LDU Quito (Liga) since 1997. With an official capacity of 55,104 is the biggest stadium in Quito and only smaller than the Estadio Monumental Banco Pichincha in Guayaquil, home of Barcelona.

The stadium cost a paltry $16 million to build and has the feeling of proper footballing arena. Unlike the Atahaulpa there is no deep, ditch nor running track to needlessly separate the fans from the action. Although there is a 20 foot net surrounding the pitch (to stop fools from throwing objects on the pitch and at players) you feel much closer to the action and have a better view than usual.

Behind both of the goals are two large banks of seats that contain the majority of home and away fans. At $7 for “Tribuna” entrance these areas are usually packed with the hard-core supporters who constantly sing, blow trumpets and bang their assorted drums. The atmosphere is excellent but you see little of the game, especially when they let off flares and choke everyone with thick, white smoke. With this in mind I decided to shell out an extra 4 bucks for the West stand, a seat and available cover from the beating, sun.

The seats are really just long benches of concrete where many can park their backside, put up their feet and sit their food. If you are hungry you need not move far to the many stands selling hotdogs and sandwiches.  Beer is readily available and free flowing with the national Pilsner, Budweiser and Brahma your choice.

At the Ecuador vs Colombia game in the Atahaulpa stadium a fortnight before the Police had decided to prohibit the sale of beer. The result was as hilarious as it was inevitable. Discontent and open abuse quickly soured into widespread rebellion leaving the Police helpless. When I ordered 4 beers shortly before kick-off they were passed over a scowling Police woman at that point resigned to the will of the people.

The East and West stands have the tribunal areas near the pitch-side and are shadowed by the many suites and boxes above. At times these stands above look more like the Grandstand at a horse race or Formula One track with a sort of egg-box set up. The stadium was obviously designed with the “prawn sandwich brigade” in mind but at $25 to entry the boxes are far from exclusive.

Even if you don’t want to venture towards the hot-dog stands at the back, many vendors wander between the seats and aisles selling food, drinks, chewing gum and cigarettes. The short, fat women bellow at their top of their voices:  “Sandwhiches, papas y agua”. After a while it gets tiresome especially if they stand in front of your view of the game.

The game itself was fairly boring. Deportivo enjoyed the lion’s share of possession and dominated a poor Liga. Despite this the fans of both sides continued to sing and battered there drums to the final whistle and a 0 – 0 draw.

The fans then slipped out of the stadium and onto the busy streets and markets outside. There was a heavy Police presence outside complete with horses, riot shields and even an armoured, Mad Max style tank but they were totally un-necessary. The fans were separated for a few hundred yards then they mingled together and boarded the many buses and taxis waiting to take them home.

As a fairly big match on the Ecuadorian Serie A calendar the “Clásico Capitalino” was a fairly, sedate affair. The stereotypical image of the Latin American football match is riots, passion and incessant noise but I suppose the “hinchas” alike the die-hard fans and ultras of Europe and the UK sometimes just want to chill out and watch the game on a Sunday. 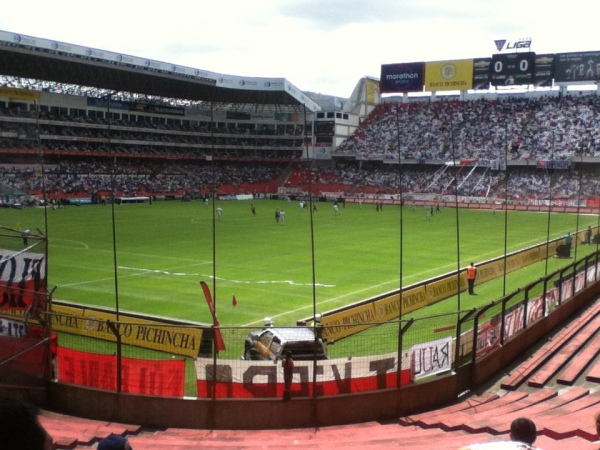 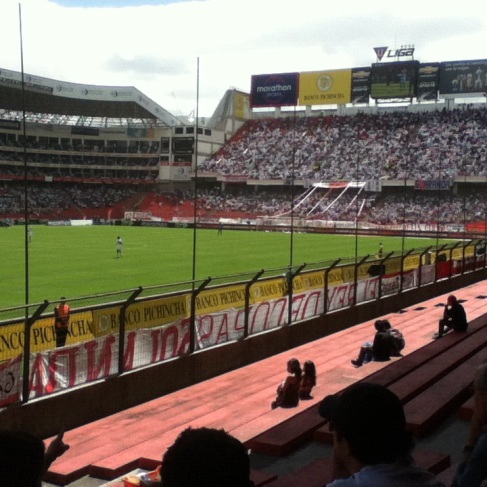 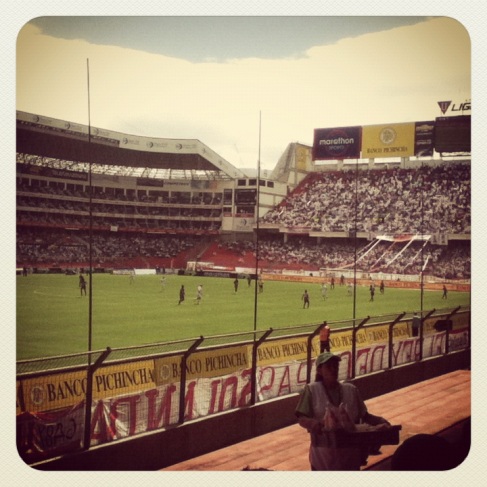 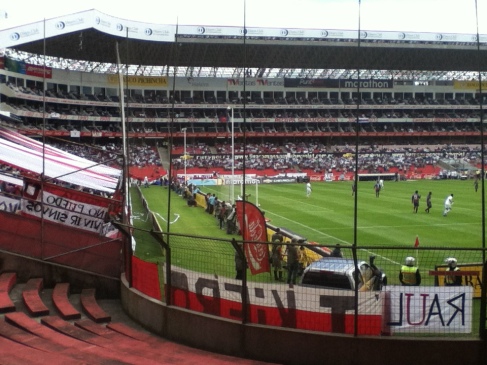 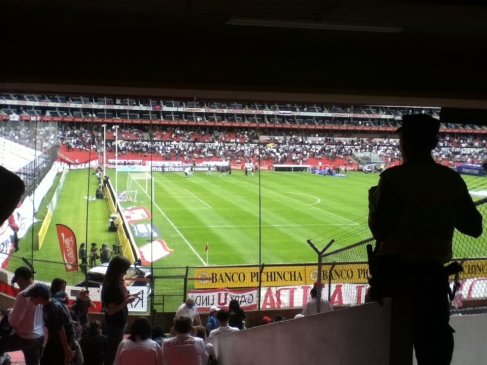