25 years since that awful day in Sheffield when 96 fans never came back from a football match. I was only 13 on that day but a dyed in the wool Reds fanatic. I remember watching the news in disbelief and calling on my Mum to witness the awful events on the TV. At first it didn’t look so bad but as the death toll gradually increased it became clear that we had a terrible disaster.

Some people may claim that Liverpool fans have clung on to this disaster and almost become defined by it, but who wouldn’t? Certainly not the family and loved ones who have suffered then been lied to and blamed for this national disgrace. The investigations are still ongoing and still there will be lies uncovered and new claims of corruption and downright criminality laid before the Police and politicians.

And this is what is so galling for the families: The lies that were perpetuated by the odious, Sun newspaper, through Police leaks and insider information, unbelievably trying to blame the victims, many children, for the disaster, claiming they were hooligans or casuals steaming drunk. The Police choosing not to admit their own negligence and failings but again blaming the fans, standing back and refusing to accept culpability in any way. The government of the time headed by Margaret Thatcher who relished in her destruction of the working class trade union movements and her open hatred of football supporters and the north. We all know she was architect of the cover up in the ensuing years.

Like many of these disasters the truth will never totally known and the families will go on reliving that hellish day a quarter of a century. The years will pass into decades and beyond but the 96 and all those who suffered should and shall be never forgotten. 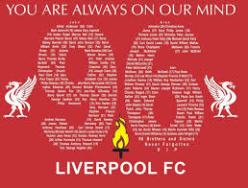 Like many football mad Scots kids of the eighties I was Liverpool fan and Kenny Dalglish was my favourite player.

Dalglish was a genuine super-star, a truly world class player the likes of which Scotland has never seen since. In addition to this Liverpool had Alan Hansen, Steve Nicol, Greame Souness and even John Wark and Gary Gillespie giving the team a sturdy Scottish spine.

As a result I was a Liverpool fanatic. I had the shirts, school-bags, towels, cups and glasses, footballs and full bed-spread.

I can remember watching the BBC with my folks as the dreadful events of Hillsborough filtered through. It was hard to comprehend as a 13 year old that so many fans had died after simply going to a football match.

Last weeks independent report confirmed what all the fans of Liverpool and other clubs already knew: the authorities and the police were to blame and together with the odious Margaret Thatcher and her Conservative government they had tried to cover-up their culpability.

The extent of the cover-up will eventually come out and the families of the 96 will finally get some sort of justice 23 years too late.